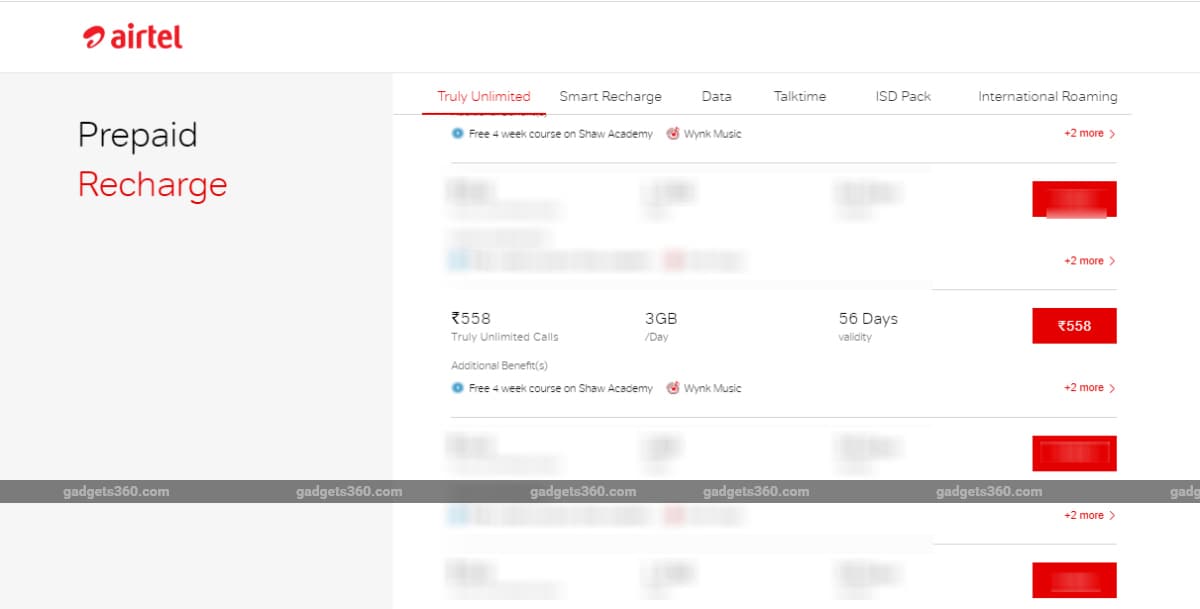 Airtel Rs. 558 prepaid plan is live in all telecom circles in India

Airtel has revised its Rs. 558 prepaid recharge plan to reduce the validity by 26 days. The telecom operator had revised its entire portfolio earlier this month, increasing charges or reducing benefits. Now, in the case of the Rs. 558 prepaid recharge plan, the validity has been reduced, but all the other benefits remain same. Airtel recently also introduced Wi-Fi calling service in Delhi-NCR, allowing customers to make calls over a Wi-Fi network, just like a regular voice call. It doesn’t require a separate app, and all users need to do is enable the Wi-Fi calling option.

Coming back to the Airtel Rs. 558 prepaid plan, the benefits include truly unlimited voice calls, 3GB data per day, and 100 SMS per day. The validity has been reduced from 82 days to 56 days – a heavy reduction of 26 days. Additional benefits of the plan include free four week course at Shaw Academy that allows users to learn anything from photography to music. The validity of this benefit is just 28 days. Other add-ons include Wynk music subscription, Airtel Xstream App Premium subscription that offers content from Zee5, HOOQ, 370+ Live TV Channels, and over 10,000 movies. The pack also offers Rs. 100 cashback on FASTag as well. The revised Airtel Rs. 558 pack is available in all circles, and can be recharged via the Airtel Thanks app or the company website. This reduction in validity was first spotted by Telecom Talk.

Airtel recently expanded support for Wi-Fi calling to six more phones, and these phones are the Samsung Galaxy S10, Galaxy S10+, Galaxy S10e, and Galaxy M20, as well as OnePlus 6 and OnePlus 6T, enabling them to switch to voice over Wi-Fi inside their homes/ offices. As mentioned, the service is live only in Delhi/ NCR for now, but it is expected to be rolled out to all major cities soon.